OK, Betty’s talking about sex. But I want you to do this for me if you will: think back…to your very… first…DECK.

Mine was a University Books RWS, a lonnnnng time ago. I had it for about 10 years, from about age 13 to 23. It finally got lost in a move.

I loved that deck! (In spite of the crazy pink ankh backs.) I used to practice while my roommates were watching boring television, endlessly riffle shuffling and laying the cards out. One guy, superstitiously, got scared I was putting curses on him. 😆 I probably should have, he was a shitbag! But the Karminator eventually got him. 😉 All hail the Karminator!

A few years after I lost that deck, a friend gifted me another RWS, a “normal” one with plaid backs, but I couldn’t love it. I didn’t know why, and guessed that maybe I’d moved on? The deck was special for sentimental reasons (the gifter was a good friend, the best anyone could hope for – Brandi/Judy if you’re out there, leave me a comment!) but I just couldn’t get into it the way I used to.

The years went on. I got an “Original” RWS, and I liked the green tones in the deck, but not the lines. (The lines were so borked, some of the facial expressions were changed. Case in point: the Empress.) That deck isn’t really original, I’m told it’s from a 1930’s print made when the plates were quite worn.

But – besides the “Original” phase, the font phase, the copyrights on the card faces, etc. – all of which I could overlook – something else was not right. And it took getting another copy of the University Books deck on ebay for me to figure it out. Look at these brilliant turquoise blues!

And the curious details like the extra rock on the island behind the 2 of Swords lady: 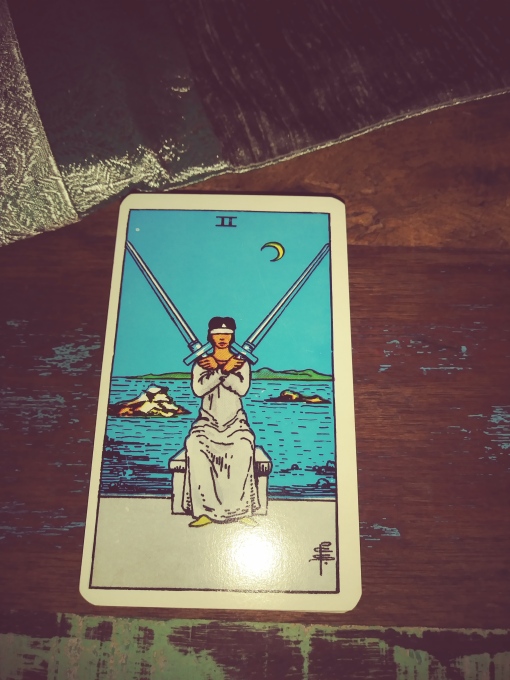 And the half-shadow on Rosalind’s face:

Compare the colors. The USG High Priestess has dull, greyish blues and near-invisible greens. But the University Books High Priestess – well, see for yourself!

For me, there is no RWS that can compare with University Books. Not the Centennial, hell, not even a Pam A or B. The only beef I ever had with it was those pink ankh backs (they bugged me back then!), but now I appreciate the sheer kitschiness of them. Of all the RWS repros I’ve seen, none beat this one. ❤

What was your first deck? 😀