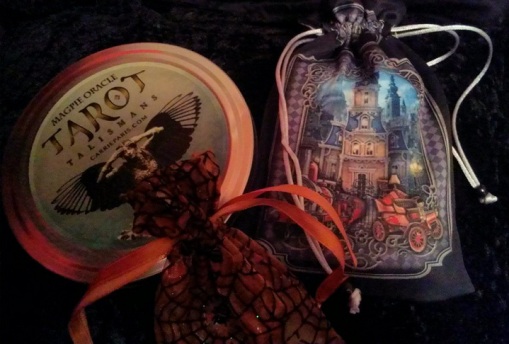 (A nod to Mr. Stephen King for the title – tis the season!)
Just checking in with a quick mention of Carrie Paris’s Tarot Talismans, Professional Dreamer’s Hallowstones, and Ciro Marchetti’s Fin de Siécle Kipperkarten deck. I will be blogging more on each separately as time allows, they’re all fabulous.

The Tarot Talismans are pure genius. There is a charm for each Trump, and the rest of the deck has been reduced – you can determine the rest via four suit charms, a ten sided die, and four chess charms that represent the Courts. It’s all explained thoroughly in the free PDF download available here. The tin is beautiful and large enough to hold a few extra things, the charms themselves are in a small organza bag and more portable than all but the tiniest mini deck. You can toss it in a little sling pouch along with your keys, wallet, phone and a little makeup and be ready for anything. 😀 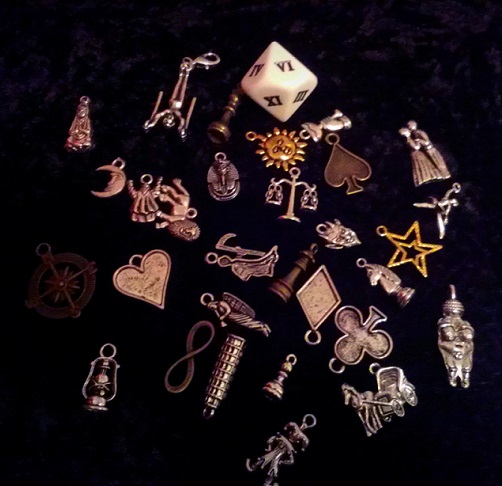 When it first arrived, I made a game of guessing which charms represented which card, and it was very easy. The meditating Kuan Yin makes a perfect High Priestess/Papess, the ballerina is obviously the dancing lady from The World. And a lot of them are literal, like the Sun, Moon, Star and Tower.
It can be purchased here, along with other Needful Things: http://carrieparis.com/shop/

The Hallowstones are Halloween/Samhain-themed, but I’m going to use mine year round – it’s my favorite holiday, after all! 😉 They’re somewhat like those wonderful Crowstones, but distilled down to twelve symbols that still manage to give a nuanced reading. Robyn is just really, really good at coming up with these things, they always work well. Even the pickiest of us love the Crowstones, and the Hallowstones are equally good, I think. It’s another very, very portable casting oracle. And it comes with a laminated casting sheet: 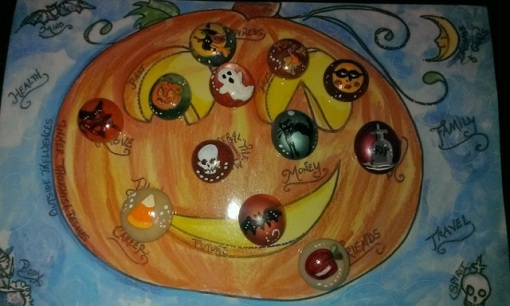 The whole thing is very cheery and playful-looking, but it will dish the dirt, too, if you need it to do that. 😉 It’s available here, also with other Needful Things: http://tarotgoodies.webs.com/apps/webstore/

Now to get away from casting for a bit and talk about a deck. Ciro Marchetti has done a Kipper, not “Kipper inspired” or any of that, it just IS a Kipper, as much or moreso than Leidingkarten or Mystiches. It’s called the Fin de Siécle (pronounced “fon duh see-ECK-luh” – audio HERE) Yes, there have been changes – the cards are slightly larger to show the art, and the images have been done in a way that’s less ambiguous in many cases, and easier for beginners to understand. Compare the Original “Getting A Gift” and Ciro’s Gift card: 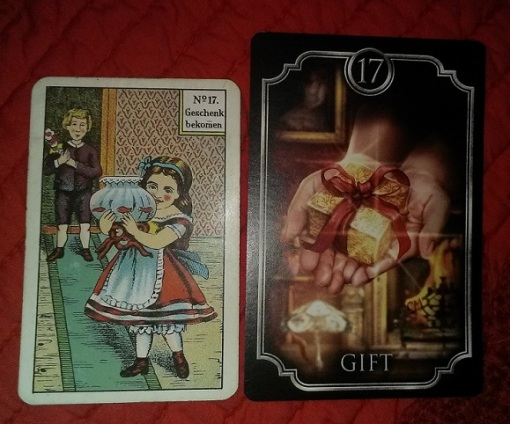 It’s a lovely deck, somewhat more shadowy than other Marchetti decks, both in color values and subject matter – it has cards that convey some extremely gritty elements of life. The deck balances the Gilded Age lifestyle with the Dickensian poverty that went along with it and makes for a great spot-on reading deck that’s relevant today.

The stock is good, flexible and lightly coated. It comes with a printed satin bag and a personally autographed card. When you purchase, you’re sent a link to a downloadable Companion PDF that I’m honored to be a part of, along with Susanne Zitzl, Fortune Buchholtz, and Mr. Marchetti. The Companion Document contains cards descriptions, meanings, spreads, and Ciro’s commentary on the creation of the deck and the rationale behind the changes he implemented. At sixty-odd pages, it’s substantial. There’s also instructions for downloading a free app that’s a lot of fun – you point your phone at a card and it becomes animated – sound and movement! – and it shows you the card meaning (or, in the case of the Courthouse, the judge tells you!)

So it’s good value for the money. I’m told that US Games and Königsfurt-Urania Verlag have already licensed the deck, and we’ll be seeing that in a year or so, but I like these less-coated cards with all the bells and whistles. 🙂

It’s available here (and you can also see a sample of the app in action): http://www.ciromarchetti.com/#!kipper/c1irz

And here is a teaser video that gives you a good idea of the art:

And because some of the cards reminded me of this movie, here’s the incomparable Lon Chaney Sr. and little Jackie Coogan (who grew up to be our beloved Uncle Fester!) in 1922’s Oliver Twist: