The question is rhetorical, of course. The Thomson Leng Tarot has been around since 1935. The art is very 1930’s. And while the RWS is theatrical (some of the scenes are actually taking place on a stage), the Thomson Leng is cinematic.The extra card shown above reminds me of those prologues you see in movies from that era. Here’s one from 1938’s The Adventures of Robin Hood (starring Errol Flynn and the marvelous Olivia deHavilland, who recently left us at the age of 104):

The Thomson Leng was originally published in 1935 as a promotional giveaway for a womens’ magazine in the UK. You can see the RWS influence – some things are almost identical – but some cards are quite different and there are other influences at play. Compare the arrangement of the Rods suit symbols to the corresponding cards in the Knapp Hall, published 6 years earlier: 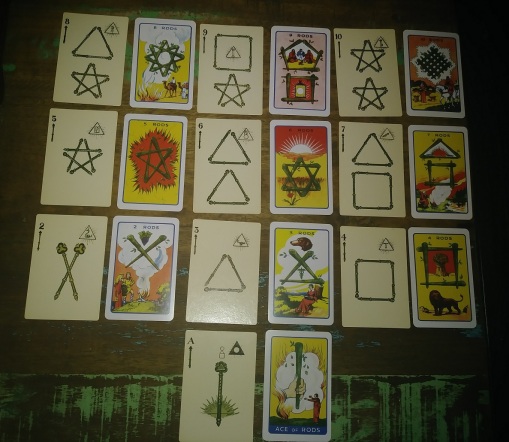 I think using this deck could really open up the Knapp Hall. For all of Manly P. Hall’s wisdom and erudition, he wasn’t helpful in this regard at all:

and so I’ve been falling back on TdM/playing card meanings. It will be good to have a better understanding of the suit symbol configurations.

As it turns out, both the Thomson Leng and the Knapp Hall are influenced by Eudes Picard:

(Photo/scan credit to Philippe at http://www.tarotforum.net/showthread.php?p=4352748 )
(And wouldn’t I love to get my hands on a copy of THAT deck!)

The elements are switched around – Swords are water, Cups are air. Additionally, the Fool is numbered 21. So if you’re heavily invested in doing it differently, this might irk you. But I just view it as vacationing at a place where the rules are a little different. “When in Rome…” 😉

There may be some Vera Sibilla influence, as well. I wish I knew who drew the TL, I think they must have been pretty knowledgeable! This was in the 30’s, long before the internet, which makes it all utterly amazing. 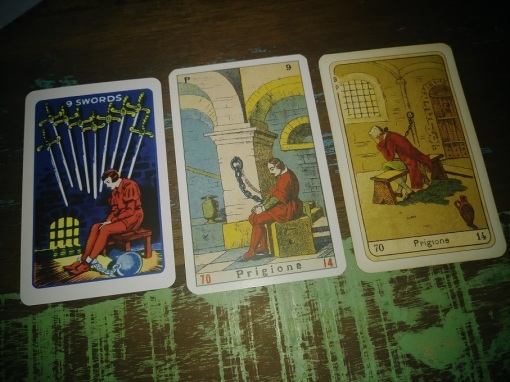 All of this geeking out is fun, but it’s important to remember that this is a reading deck, designed for housewives and single working women, most of whom were surely hoping to become housewives. There’s no nudity other than one exposed boob on the World card, lol. And these women had questions about what will happen and cared not one whit for occult correspondences, the historical sources for the ideas behind the deck, or how/if the Fool should be numbered. They just wanted to tell fortunes, and the Thomson Leng delivers beautifully.

The reproduction includes spreads from the original instructions. Here’s one that Mary Greer blogged that looks fun: it has cards you can’t look at or “all the favorable indications will be reversed!” https://marykgreer.com/2009/07/16/the-eastern-cross-spread-thomson-leng-deck/#more-1755

They’re interesting, as spreads go, but when the rubber hits the road I don’t care much about spreads, and I wish they’d included the meanings, which are available free in PDF form where the deck is being sold. just scroll down: https://www.tarotcollectibles.com/store/p148/Thomson-Leng-Tarot.html

Those are the REAL treasure, purely cartomantic, stripped-down fortunetelling meanings with no filler, self-help pop psychology or new age platitudes. No tough esoteric nuts to crack, either. Here’s an excerpt:

When I was researching the deck online, I saw that someone said these were “wonky meanings”. Has Tarot fallen that far? Are practical meanings concerning things that people actually ask about considered “wonky”? Ghaaa.

That’s one thing I would have done differently, I’d have certainly included those meanings with the deck! The other thing is that this deck would be sumptuous in linen. The original was linen – in 1935! And going by photos I’ve seen, it was that old style cambric/linen finish that actually looked like woven cloth, not the tiny raised squares that pass for linen nowadays. But the stock is still excellent and the cards fan and shuffle beautifully. And they do make the PDF available on the website, so I really can’t complain too much. I hope they take these things into consideration for future editions, though. It would be enough to convince me to buy a second copy!

Here are more images. The Majors:

And a few notable Minors: 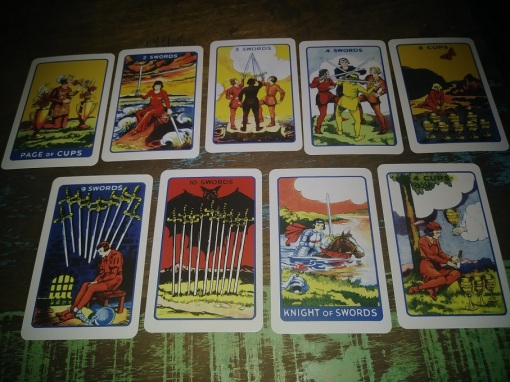 I suppose we have time for a quick test drive! Let’s do a fun one: Will Trump go to prison?

I like the Torah that the Great Priestess is holding, it suggests a reckoning. And she’s a card of secrets – what new information will come to light? The 5 of Swords is a card of loss…ours? We’ve collectively lost a lot because of him. But it could also be his loss. He’s done so much damage, virtually nobody wants him to get away unscathed. And the final card – hahaha, I love that the way that bound bundle of yellow wheat looks like his hair, and it’s hemmed in on four sides and guarded by a lion. But I’ll check the LWB since this Tarot is so new to me. “Power and plenty, with a fine chance of health and happiness, will be yours.” It’s obviously a harvest card. We will harvest what we have cultivated, and in his case that’s lies, hate, and greed.

The cards don’t promise prison. But there will be consequences. Seized assets and imposed limitations at the very least.

All in all, I love the deck. The 30’s are my favorite decade and I adore things from that era: movies, Art Deco, fashions…well, everything except the appalling racism, grinding poverty and the rise of fascism in Germany. But (with the exception of racism, we still have a lot of work to do to eradicate that) I think that for the most part, people dealt with those things effectively. Of course history repeats and these things are rearing their ugly heads again, but I like having a historical template of what worked. It’s a very relatable time. And the deck seems relatable, too!

You can purchase the Thomson Leng (and download the LWB) at this link: https://www.tarotcollectibles.com/store/p148/Thomson-Leng-Tarot.html