Who is Shelley Barnes?
Was she in Andy’s course under a screen name? Or has she been outside the online community quietly soaking up books – the good ones, Andy’s, Rana’s, and Caitlyn’s?

I’m asking because she seems to know what she’s doing. This is actually a great little deck.

The art is wonderful. The tuckbox reminds me of title cards on silent movies – the kind of thing you’d see with Lon Chaney Sr. or early Clara Bow. The whole thing seems to have a 20’s-through-Noir feel, possibly the most modern feature of the deck is the Bettie Page bangs on the Lady.

But good art doesn’t often translate to a good reading deck, the reason being that the artist lets their vision override reading conventions and practical concerns. This is the part of the reason I stick with antique reproductions as a rule, (the other reason is godawful bad art) and tune out 99.999% of the new Lenormands that are constantly coming out. Lots of competent artists have made unreadable pretties. Not Shelley.

Does this deck have aberrations? A few, yes, but no more that you see in some of the old decks that have things like two scythes on the Scythe card. And in no way do they make the deck unworkable. Let’s have a look at them:

The mouse appears to be dead or sleeping. Well, if you’re killing mice, it’s because they’ve infested. Or maybe he’s just taking a nap after he gorged on your food. Either way, it’s still loss. And very clearly a mouse. The Tree is a palm tree. Still a tree, still recognizable, same meaning. The Clover is encased in a glass pendant with a chain, but it still pops out at you right away. The Park has a statue of a naked woman predominating, but you can see the pedestal, you know it’s not the Lady. It’s a statue. Statues are in Parks and Gardens. The Cross is more symmetrical than usual, a little less churchy – so what? And the Tower, rather than an old structure guarding a border from invaders, is more modern. It reminds me of that famous shot in Baby Face, where the camera pans up the Gotham Trust tower to indicate that Barbara Stanwyck is screwing her way to the top, lol. OK, that has nothing to do with the card meaning. But I like it and it’s a readable Tower card, you can tell what it is right away.

Another oddity is that the playing card 2’s, 3’s, 4’s, and 5’s have been added. Would I shuffle the whole thing together and do a Lenormand/playing card reading? No, because Lenormand is based on Alemannic cartomancy, it’s a different system. Doing things like that will throw the whole thing off balance by giving you more than one card that means the same thing, or something very similar.

But I would shuffle it all together and do a playing card reading, ignoring the Lenormand symbols.

I would also use it as a gaming deck. (The Jokers double as extra Man and Woman cards. I don’t use those, since Rider and Snake are the Male and Female lover cards, but I won’t be storing these Jokers away to lie in state in the “extra Man and Woman card box”. since I enjoy playing games with wild cards.) So you have three uses in one – Lenormand, playing cards for reading, and playing cards for gaming. And it’s a mini. Keep it in your purse or pocket for spur of the moment readings, and quick poker hands to see who pays for lunch.

I went ahead and ordered the deck with the palmistry card, because it just looks cool. I really, really like the way this woman draws, I’m even keeping the business card. I’m going to find a little frame for the hand. It has meanings printed on the back, some perfectly sound, some a little sketchy. But all in all, if you don’t want to use this deck’s version of the “LWB”, just do like me and frame the hand. Or get the deck alone. Or the deck and the pendulum.

Everything else is perfectly traditional. Check this out: 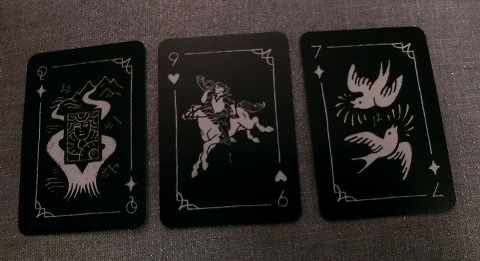 Clearly split Crossroads with both a wide and a narrow branch. (Has she been watching Malkiel Rouven Dietrich’s videos? 😀 ) Male Rider, blowing his horn and clearly hurrying along to announce something important. Two hectic, chattering birds. 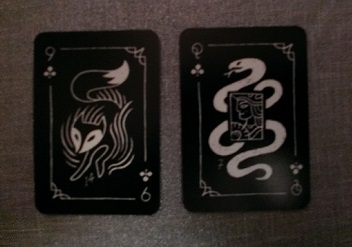 “The Snake biting the Fox’s tail.” Maybe she doesn’t know about that particular reading convention and it’s just a happy accident, but I wonder… 🙂

You can order the Black Hand HERE, (for not very much money! The price is surprisingly low.) It will arrive quickly, in a well-padded envelope with doodley things on it in Shelley’s own hand. And yes, it’s good linen stock and shuffles easily.

This is such a great deck. It may start a trend where people include playing cards to make 52 card Lenormands, but that’s missing the point entirely. It’s a great deck because it’s a good, readable Lenormand, and because it’ll make you feel like Joan Blondell on the midway in Nightmare Alley*. Can’t beat that!

*Nightmare Alley (1947) is a film adaptation of William Lindsay Gresham’s novel of the same name. In the book, there are 22 chapters, each named for a Tarot Major. There is also a graphic novel adaptation of the novel that was produced in 2012 by the great underground cartoonist Spain Rodriguez.
It’s a fantastic story, and not to be missed.