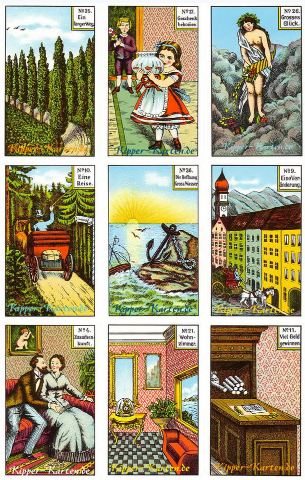 Kippers are strange…kind of Sibilla-like, but they have more of a Lenormand feel, in the sense that they cut to the chase. I particularly like the way the cards fell this time – it looks auspicious – so I’m posting it.

I don’t ask a specific question, I just put the cards down and let them talk. The center card is Hope/Great Water and it’s about dreams and fantasies. (I’m happy it didn’t come up in the LAST column, that would mean nothing coming to fruition, “just a dream”. On the other hand, cards that follow Hope/Great Water CAN happen.) Anyway, that’s the focus in this spread. The first card (A Long Way) is the trigger that brought this on. It’s a long time waiting for things to sort themselves. Those situations where all you can do is wait.

Another theme is the corner cards: A Long Way + Winning Much Money, and Big Luck + Get Together. Now, I don’t expect to hit the lottery, but my finances have been anemic for awhile (A Long Way) and that should be ameliorated somewhat (Winning Much Money). It does look like a possible lump sum of some kind (Not holding my breath, though.) This card tends to be “money out of the blue”, while “Unexpected Money” – which didn’t show up here – in spite of its title is actually the card for regular earnings, small amounts, expenses and day-to-day stuff with money. Big Luck pouring on Get Together says that I should have enough to go out of town and socialize for a day or two anyway, that’s much needed! (I live in the middle of nowhere these days. I do readings. I walk the dogs. I surf the net. Not much else. Wahoo. Yawn.)

Now the diamond, what is going to happen. Receiving a Gift + A Journey + Hope/Great Water + A Change + Living Room. If there were icky cards in the spread, I’d say getting anything and going anywhere were all a pipe dream, and it’s going to change, I wake up from my reverie and I’m in this old same living room. With my roomie’s boyfriend watching Jerry Springer and Family Feud reruns while I immerse myself online in an attempt to BLOCK IT OUT. (They’re good people, but teevee – GHAAAAA.) But the surrounding cards look very positive, so I’m going to go with the good interp – that I somehow get to do what I’ve been wanting to do and there’s a REAL change of scene for a couple of days. The Living Room card is just your own personal space after all, it can be private time alone or with someone like-minded, it can be private home, a motel room, any of that – just a place where the rest of the world doesn’t intrude.

Now the past: A Long Way, Journey, Get Together. Again, a long time waiting to go and socialize.
The present: Receiving a Gift is one of the best cards in the deck. It stands for gifts, help, emotional or material support. But followed by Hope/Big Water, I’ve been fighting my own battles for the most part. It ends with Living Room, which looks kind of neutral here to me. So the present is no great shakes, still, I like seeing the Gift card. It’s said to be lucky.
The future: Big Luck + A Change + Winning Much Money. It does look great for finances, doesn’t it? Of course, the Money card can stand for “inner wealth” as well (still nothing to spit at!) and since I was only thinking in terms of the next couple of months when I pulled the cards, they don’t carry the full weight of possible interpretations. (Still, I don’t have to ramp them down as much as I would for a daily.) Big Luck pouring down on other cards like that is AWESOME, though.

Diagonals: A Long Way + Hope/Great Water + Winning Much Money. I’ve been waiting for a lot of things to get better for a long time. Last year was a Dragon year, those are always surreally rough for me. (This year is Water Snake, should be better.) Big Luck + Hope/Great Water + Get Together looks great too…should be fun.

Quintessence: Long Way + Big Luck revealed by Living Room, and Get Together + Winning Much Money revealed by Receiving a Gift. A long time waiting on my luck to turn, which might be revealed in some personal setting, and getting together with someone brings wealth revealed by a gift. Again, nobody’s going to make me rich, this is surely the “inner wealth” referenced earlier, and while some token gift is not impossible, I suspect “gift” here is a kind of morale boost. In other words, while this spread looks pretty good for finances, the true benefit comes through people and it’s not necessarily material.

I like the horizontals, too, especially Gift + Luck. They’re the best cards in the deck, bar none. So while the specifics have yet to be fully revealed, the Kippers are definitely saying some really good things are around the corner. Dragon year is over, it’s safe to hope again. 😀